When we hear the term brocade, it might bring up images of old outdated couches and dresses worn in many decades ago. Brocade is a rich and versatile fabric that dates back to ancient times.  Let’s look at the history of brocade.

A description of brocade is that it is “fabric woven on a jacquard loom with an all-over interwoven design of raised figures or flowers.” The appearance is similar to an embossed surface with contrasting surfaces, colors often mixed with metallic threads on satin or twill grounds.

The name brocade comes from an Italian word, “broccato” which means embossed cloth. It is woven on a special loom that adds an extra weft or filling yarn. It is this technique that makes the fabric appear to be embroidered. The origin of this fabric is not documented, however, pieces of this fabric have been found that date back to China’s Sung Dynasty (960 AD to 1279 AD). Brocade was also in use in Europe by the 13th century. Some theorists contend that the Crusaders of the Middle Ages brought the fabric to Europe from China.

Increased Use of Brocade

As it is with most luxurious fabrics in historic costume, the powerful and wealthy were the people who were allowed to wear garments from these fabrics. Having a garment made from brocade denoted status and power. By the 18th century, garments for men and women were made and brocade garments became more common as part of the average wardrobe of upper and middle class people. What garments were made of brocade? Usually vests and waistcoats for men and dresses for women. Shoes were also made of brocade. By the 19th century, it lost favor as part of men’s wardrobes. From the 1950s to the 1970s, it was used in making evening gowns. For the modern designer and customer, brocade is used for evening gowns, cocktail dresses, wedding gowns, and men’s formal vests. 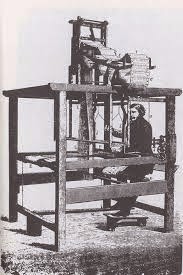 One other point that needs to be mentioned. Since we talked about brocade being woven on a jacquard loom, let’s briefly look at what a jacquard loom is. It was invented by Joseph Jacquard in 1801. Hence, the name “jacquard”. This invention transformed the textiles industry by allowing the creation of intricate designs into fabrics. The jacquard loom made it possible to not only make brocade but other fabrics as well.

According to some historians, the jacquard loom caused riots in the textile industry because workers feared they would lose their jobs. Ultimately this punch card system for the jacquard loom was adapted and modeled in early computer technology and these punch card systems continued to be used through the 1960s. Now, with that said, early brocades were made entirely by hand. The fiber of choice was silk. Brocade and damask are often categorized together but they are different. The difference between the two fabrics is that damask is a tone-on-tone fabric and is reversible, while brocades have multiple threads and the face of the fabric is different from the back. Both of these fabrics are woven on the jacquard loom.

Sewing with Brocade from Sew Much Fabric

There are many variations of brocade available to designers and sewers. The fiber content is no longer only silk. There are many blends available. Look at the Black Metallic Jacquard Brocade with a fiber content of polyester, viscose rayon, and metallic. Both sides of this fabric are beautiful. And also look at the  Violet/Platinum Brocade made with polyester, acetate, and metallic. Very subtle design with lots of sparkle when the light hits the metallic yarns. And don’t forget to look at the Gold/Cream Brocade made with cotton, polyester, and metallic. With this one, you can reverse it, based on your preference.

To learn about sewing with these fabrics, I recommend using “Fabric Savvy” and “More Fabric Savvy” both written by Sandra Betzina for tips on the proper needle size, thread, stitches, seam finishes, and stabilizers. Because of the nature of this fabric, dry cleaning is the preferred method for care.

So, what are you waiting for? Let’s get started sewing with these beautiful, inspiring fabrics. See you on the next posting. Happy Sewing!

Beverly Kemp-Gatterson is a professor of fashion design, textiles, and apparel and a published author.  Her hobbies are sewing, perfecting couture techniques, reading, and dancing. She has taught fashion design and retailing at the Art Institute of Houston for the past seven years and is now also teaching an on-line course at the University of Texas at Austin in Retail Math. She holds a B.S. in Textiles from University of Texas, M.B.A. in Management from University of Houston-Victoria, and a Master of Science in Textiles from Virginia Tech.